Skip to content
Home » News » Power Outages Part 2 : How much do battery backup and generator installations cost?
Previous Next

Power Outages Part 2 : How much do battery backup and generator installations cost?

How much would a generator cost? How much would batteries cost? There are plenty of online tools and other resources available to give you relatively quick answers, but are they the right answers? Backup power systems can run from several hundred to tens of thousands of dollars, so it’s crucial to know that your investment will meet your needs.

I subscribe to the adage “you can have it fast, you can have it cheap, you can have it done right – pick two”. Many will tend to gravitate towards “cheap”, although I’m finding “fast” is increasingly popular thanks to PG&E’s periodic announcements. Of course being in a hurry and wanting something cheap can backfire. I’m sure anyone reading this can think of at least one such example in their lives.

Backing up your home or even just a few of your home’s electrical needs doesn’t come cheap, so I can’t emphasize enough that you spend the time to make the right choice instead of spending the money to make the wrong one.

What’s your budget? This is where differentiating between “wants” and “needs” comes in and it’s the best place to start. It can take a lot of time to identify and add up all the electric loads in a home, select and price all the components, and design a backup system. It’s a drag when you find out a system is more than you have or want to spend.

What do you want or need to keep running, when PG&E shuts off the power? Very often I’ve found what people want is overridden by what they decide they really need when the cost comes in. So, you can save a lot of time by creating a list of what you absolutely need first, followed by a prioritized list of what you’d like to back up if your budget allows.

How long do you want or need to remain autonomous, and during what time of year? This is most relevant if you’re thinking of battery backup, with or without solar. But it also applies to generators insomuch as some people (or their neighbors) might not want to have a generator roaring away for more than a few hours.

Doing it right can involve a substantial investment of time simply because of the variability associated with the individual electrical items that you’ll be operating during an outage.

Doing it right also depends on what it’s going to take from an installation point of view to power up the items you need to run.

Here are some typical items we’ve had people run without utility power and a brief note about each. There’s quite a bit more to know, but this will give you at least a head start.

There’s a couple ways to go about figuring out how much power you use.

One way is to use a handy little plug-in unit called a kill-a-watt available for about $25, to measure your fridge or anything with a standard outlet plug. The directions describe how to use it to see how much power your unit uses in a day. 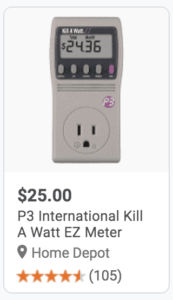 Another way is to estimate your daily power use by knowing the size (cubic feet or dimensions) and the date your fridge was manufactured, which is typically on a label inside. They’ll often have a “FLA” (full load amps) on the label too, which indicates how much power it’ll use when it first turns on (amps times 120 volts = surge power). Like most anything with a motor there’s a brief “surge” in power when it first turns on. The surge power can be important to know as it’s possible it can overload a backup power source if it’s not properly accounted for.

How much you might pay for a battery, generator or both will depend heavily on what you choose to live without during an outage.

It’s not uncommon for someone to start out wanting to back up everything, and that’s sometimes the solution, but the cost of the equipment to serve an entire home may be too high. In this case a portion of the circuits, what we call the “critical load” are moved into a separate subpanel (see picture). Anything with a motor is going to be a big power user, and the less essential it is the more likely you may end up taking it off the list. For example, the clothes dryer might be first to go and be replaced by a clothes line, followed by the furnace or heat pump, especially if the home has a wood stove.

Another really important thing to know is that the circuits you back up are going to be moved to a new “critical load panel”.

If that new panel can be placed right next to your existing panel where your meter is it’s going to be easier (and cheaper) to extend the wiring over to it. But, what if you have circuits off in a different more remote panel somewhere we call a “subpanel”?

Maybe it’s where your well pump circuit breakers are located, and it’s really important that you have water during an outage! If that’s the case, the well pump wiring would need to be extended back to the critical load panel in which case, it’ll be a little more involved. Do you know which breaker switches are associated with particular outlets or light switches? They may not be clearly indicated, but it will be important to know which circuits will be moved over to the critical load panel, so a well-labeled panel is recommended.

Knowledge is power and money doesn’t grow on trees, so I trust this article will be helpful in understanding some of the basics involved in getting yourself a backup power system.

For more on your backup options during a power outage see Part 3, Battery Vs Generator, Advantages & Disadvantages, coming up in our August newsletter. In the meantime, please check out this link for

For more on your backup options during a power outage, sign up to receive our monthly newsletter.

Battery Shortage? How about water batteries?

Security and Comfort amidst COVID-19

Expert Corner: Tips only an experienced Electrician can give about Generators

Portable Generator Tips from the Experts!

Power backups using batteries and generators in Northern California are a major issue and topic of conversation our community. PG&E is proposing power outages for Nevada County, Grass Valley, Nevada City, Penn Valley, North San Juan, Auburn and surrounding Placer and El Dorado Counties. Not only will PG&E by shutting down power for maintenance in Northern California, they may also shut down full power lines due to fires and other public safety issues. Stay tuned for more information on power outages in California, Nevada County and Surrounding areas.