This one has been making the rounds around Nevada County lately. “Radiant Barrier Insulation”, “Reflective Insulation” or “Radiant Insulation” are various names applied to products that are typically of dubious merit.

While it depends on the circumstances under which and the way they’re installed, they generally don’t perform as advertised, don’t save enough to justify their cost and – more importantly – there are typically far more cost-effective solutions. First off it’s important to differentiate between three different types of insulation products.

There are materials like fiberglass insulation or foam that resist the flow of heat by virtue of their thickness, products made of some sort of aluminum foil material, and products that combine the two in some way. 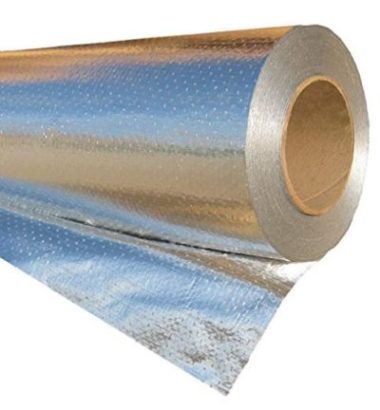 Products like fiberglass or foam slow the flow of heat moving through them. They’re tested using standardized FTC (Federal Trade Commission) tests, then labeled with what’s referred to as an “R-Value”? R-value is a measure of a material’s “thermal resistance”, or its ability to resist heat flow.

By comparison, foam insulation is typically around R-4 to R-7 per inch, depending on the type, and is sometimes used in a vaulted roof (where there’s no attic), or on the outside of a wall to provide extra insulation.

Aluminum foil or “radiant barriers” don’t insulate, per se, they work differently in two ways. First, they reflect radiant heat, a property that’s easy for most people to relate to, and they’re rated according to their “reflectance” or “reflectivity”. The second way they work isn’t as familiar to most people, and this property is called “emittance” or “emissivity”.

A surface with a high emissivity radiates heat away better than one with a low emissivity. In other words a high emissivity surface is really good at emitting (sending off) whatever heat it has accumulated to the atmosphere or some other surface at a lower temperature. Let’s try to relate to the concept of emissivity with an example you might be able to relate to.

The answer is emissivity – the white painted surface has a high one, so it sends back out what little heat it has absorbed (what hasn’t reflected off), but the aluminum surface has a low emissivity, so it’s holding onto that heat.

Think of two sheets of shiny aluminum, side by side, and imagine one has been painted with bright white paint. Imagine they’ve both been sitting out in the afternoon sun. Both surfaces are highly reflective.

The answer is emissivity – the white painted surface has a high one, so it sends back out what little heat it has absorbed (what hasn’t reflected off), but the aluminum surface has a low emissivity, so it’s holding onto that heat.

Now to the scam part where, in this case, the scam is really more a matter of greatly over-promising and under-delivering on savings.

Have you had a salesperson pitch the idea of having them put a radiant barrier on the floor of your attic? Have you been told “it can reduce your cooling bill by 50%”? Despite decades of complaints filed to the FTC (Federal Trade Commission), extravagant claims like this, and others we’ll talk about below, still show up.

If you’re getting pitched on this, just say no, and here’s why. While it’s easy to simply roll this stuff out on the attic floor, and it may help a tiny bit for a little while, it’ll eventually get dusty and stop working.

In an attic situation you’re far better off adding insulation. Once you get over R-38 attic insulation, the minimum recommended in our area, even the benefit of a properly placed radiant barrier (stapled to the underside of the attic roof rafters) disappears.

Another important thing to know is that a radiant barrier only works if it’s facing an air space. If the material is sandwiched in between two other materials it’s virtually worthless. In terms of adding insulation, there are a few important things to know beforehand, however, here’s a link to that – https://www.energystar.gov/campaign/seal_insulate/do_it_yourself_guide/adding_attic_insulation

Another example of a greatly over-rated use of a radiant barrier is foil-faced bubble pack. It’s just what it sounds like, bubble pack with foil laminated onto both sides. Claims that it has “R-values” of R-5 to R-10 or higher is pretty outrageous considering it’s actually about R-1. 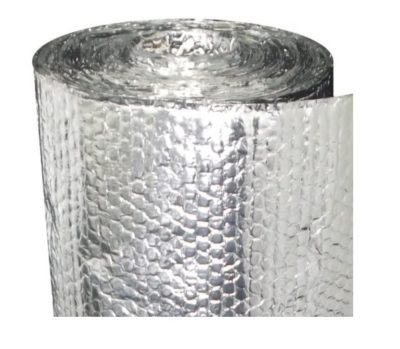 A similar product is a thin roll of foam with foil on both sides. There’s one that’s less than ¼ inch thick, claiming to have “R-value up to 15.67 (with one layer)”. The bottom line is radiant barrier applications rarely pay off, and there are usually much more effective choices.