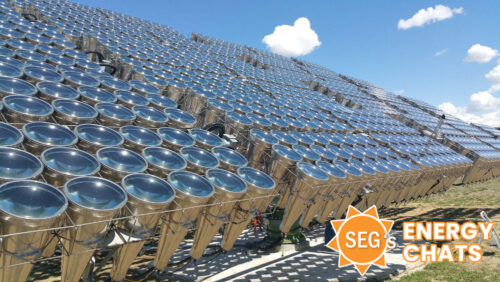 Question by an SEG Customer:

The panels and equipment that you installed in ’17 are working well. My question has to do with photons. Energy produced by the panels converts what wavelengths of the sun’s spectrum to electrical energy? Is it everything except infrared?

Could properly placed reflective mirrors (either silvered or just a highly reflective metal) increase the panels’ production? Would the extra heat produced cause damage?

Answer by Joe Nelson (Licensed Electrician) :
Let’s talk physics for a moment.
Light (energetically) is made up of photons, even light not visible to our eye is still comprised of photons. These photons at the upper and lower level of light (outside our visible range) are typically either moving too quickly or too slowly for efficient conversion into Photovoltaic electricity, therefore most solar panels are designed primarily to use the visible light spectrum most efficiently. Ultraviolet light has too much energy, and its byproduct is heat which lowers the panel’s ability to convert photons to electricity. On the other hand, the infrared end of the spectrum just does not have enough impact to knock loose those pesky electrons on the solar panel.
Your logic is sound, in that the two limitations to capturing solar energy are a) intensity of the sun’s energy and b) heat. You are may be familiar with “Concentrated PV,” in this configuration they use lenses to focus the intensity of the sun onto the surface of the solar cell, they then use water to bathe it all in and wash away as much heat as possible wringing the most efficiency out of it as possible. you absolutely could increase the intensity of the sun either with a reflective surface OR a lens, and at that point your production would go “up”, this would be counter balanced by the loss of efficiency as the material heated up and in a roundabout manner the gain would be a wash against the losses. 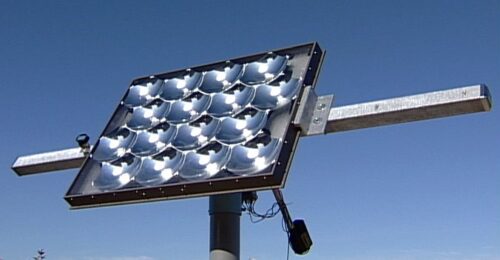 This would not “damage” the solar cells (other than the risk of truly overheating them and cooking the material) but it would “shorten their lifespan” by accelerating their deterioration. Therefore, most of the design schemes you see are experimental in nature. When NREL is testing differing types and strategies for modifying these technologies they are seeking to increase efficiencies by fractions of a single digit percent, we have the luxury of designing inside an “achievable goal” in this case the client says, “make my PG&E bill go away”. I know with absolutely certainty there is an increase in efficiency I can gain somewhere! But is that gain and its cost worth the reward realized? Usually, the answer is no. 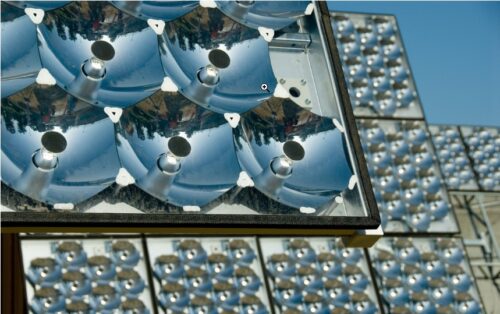 To play devil’s advocate, if we took your system off the roof and placed it in the backyard, and were able to wash water across the surface of all the panels like a recycling fountain(with a large enough volume of water to remove the heat and shed it to the ambient environment), and then place either mirrors or Fresnel lenses arranged to increase the intensity on the solar cell’s surface, you would see a gain in collected energy.
Editer: Don’t you wish all electricians spoke so sweetly?! Thank you for sharing Joe!
Until next time on SEG’s “Energy Chats”
##
Joe Nelson2021-09-01T15:13:42-07:00

Joe Nelson
Joe Nelson is SEG's Director of Engineered Services and Project Manager for almost 10 years. He is a licensed professional contractor and electrician who holds C-46/C-10 classifications. Joe has over 21 years experience in the energy industry. "Combine Solar Thermal, Photovoltaics, and Sunshine, and you have Joe Nelson."