Do you have friends or family members who aren’t convinced that renewable energy is a win-win for human health and the economy?

Share with them some scientific evidence to credibly explain the benefits of renewable energy and distinguish fact from fiction. All too often, the oil and gas industry’s marketing tactics and slanted journalism are one sided, and are designed to misrepresent the facts.

Recently, Yale Climate Connections published an article that compares the health and economic impacts of different types of energy, looking at the energy industry holistically without partiality. What did they find? They discovered that the numbers speak volumes for the benefits of renewable energy. In fact, many of the principal arguments used to undermine confidence in renewable energy technologies more accurately describe fossil fuels than they describe renewable energy. Here are four renewable energy myths that the article dispelled:

1. Renewable energy technology is economically unsustainable because it is largely dependent on government subsidies.

However, this argument is technically false because it ignores both the historical context of energy development in the United States and the quantity of government subsidies invested into other energy sources. “In the United States, the federal government has paid US$145 billion for energy subsidies to support R&D for nuclear power ($85 billion) and fossil fuels ($60 billion) from 1950 to 2016. During this same timeframe, renewable energy technologies received a total of US $34 billion.”[1]

While renewable energy technologies are aided by federal economic incentives such as tax credits and rebates, they help spur economic growth through increased demand in renewable energy, which translates into greater growth and job creation.

The more accurate way to assess the economic feasibility of different types of energy is to compare their leveled cost without subsidies. Leveled energy cost is the universal per unit cost of electricity calculated by dividing the total production and operation costs of a power plant by the quantity of electricity produced over its lifetime.[2]

Two credible sources of research on energy economics are the Energy Information Administration and Lazard Financial Analysts. Both of these organizations conducted detailed and comprehensive studies on the leveled cost of electricity and came to the same conclusions—that solar and wind energy are less expensive than any of the fossil fuels (coal, propane, and natural gas) based on a per unit cost-production analysis. 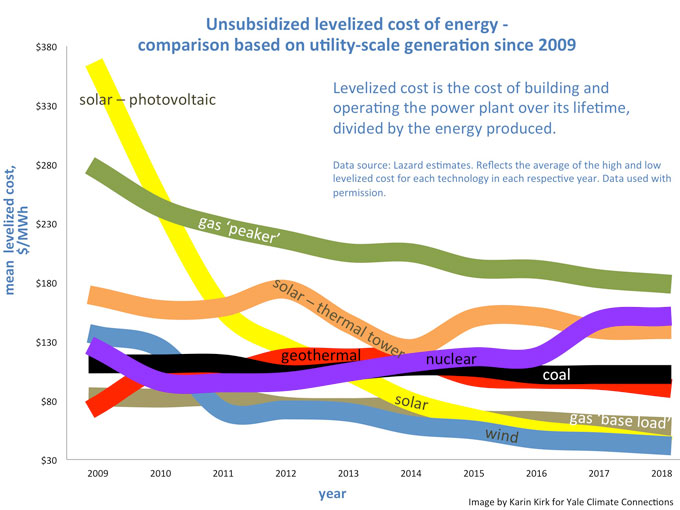 2. The coal industry is a stable source of employment for Americans that will be maintained into the future

According to the U.S. Board of Labor and Statistics, the rate of growth of employment in coal mining has precipitously declined over the last decade. 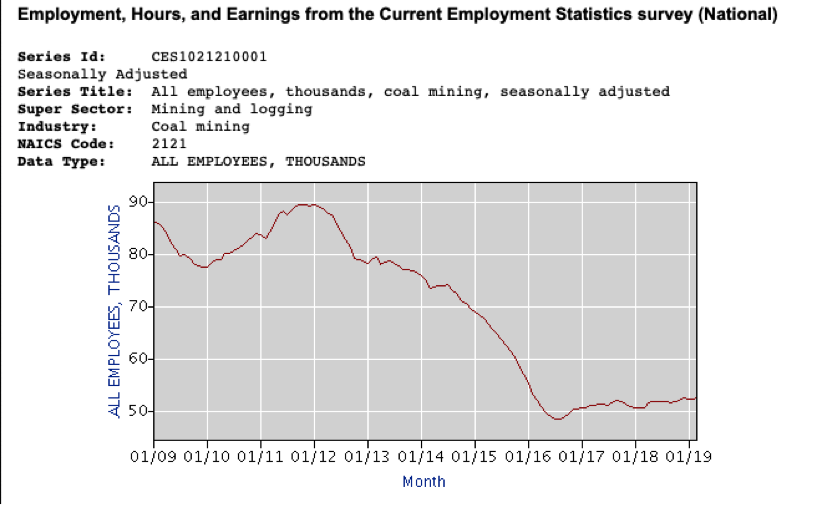 On the other hand, the top two fastest growing jobs in the U.S. economy in 2016 were solar installers and wind turbine technicians, respectively.

According to the U.S. Bureau of Labor Statistics, employment of solar installers is expected to grow by 96% between 2016 and 2026, and for wind turbine technicians, the growth will be 105%. Now how’s that for economic prosperity and job security?

3.Toxic solar panels are damaging to the environment and require unsustainable mining of minerals

It is true that solar panels contain a small amount of heavy metals and toxins. But these metals are found in a wide range of ubiquitous electronic devices, such as computers and cell phones. However, unlike these technological gadgets, which are designed to be replaced every few years, solar modules are usually warrantied for 25 years.

In terms of the manufacturing, “Solar panels are mostly made of glass, which is easily recycled. The remaining major components are plastic, aluminum, silicone, and metals, each with its own pathway for recycling and disposal.

The recycling efforts of solar panel manufacturers can be compared using the Solar Scorecard.” [3] In terms of the ability to recycle existing solar panels that are broken or being replaced, there are currently companies that provide recycling services and the list is growing.[4]

We need to acknowledge the fact that all forms of electricity production have environmental impacts.

“Environmental impacts are an inherent part of electricity production and energy use. Electricity generated from renewable energy sources has a smaller environmental footprint than power from fossil-fuel sources, which is arguably the major impetus for moving away from fossil fuels to renewables.”[5]

While it’s true that wind turbines are a source of bird fatalities, those numbers should be put in perspective with other causes of bird deaths. According to the U.S. Fish and Wildlife Service, the estimated number of birds that die each year due to oil pits (750,000) is nearly twice that of the birds that die due to wind turbines (328,000).

Moreover, when compared with other types of energy, wind turbines actually rank the lowest with regard to bird mortality. According to a wildlife study published in the Journal of Integrative Sciences “fossil fuels cause approximately 35 times more bird deaths per unit of energy generated” than that of wind energy.[6]