Skip to content
Home » News » Q and A With President and Founder, Ray Darby
Previous Next

Q and A With President and Founder, Ray Darby

Q and A With Ray

This Q & A pertains to California’s Quantum Leap in Building Standards. The questions answered here come from inquiries into concepts, technologies and standard specific rhetoric found in our article on California’s rooftop solar mandate. What are heat pump water heaters?

A heat pump water heater is an electric household water heating system that takes heat out of the air and puts it into a tank to provide you with hot water. What you have is heat being transferred from air to water. It compares to an air source heat pump, which takes heat from inside or outside to regulate the temperature of a building; in this case, you have heat being transferred from cool outdoor air to a warmer indoor space.

A thermal envelope defines the conditioned (heated or cooled) space in a building. It normally doesn’t include the attic unless there’s no attic floor insulation, in which case, the insulation is placed in the roof instead. This is often done so that ducting can be placed in the attic, making it part of a building’s selectively heated or cooled space to reduce duct heat loss in winter and heat gain in summer. Generally, the envelope is bounded by the roof/ceiling, walls, floor, doors and windows.

What is demand-responsive technology? 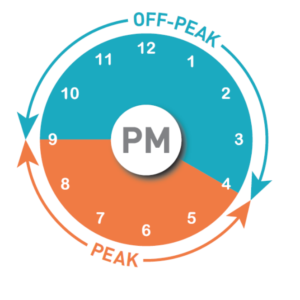 Demand-responsive technologies, also referred to as demand-response controls, coordinate the hours of operation of building systems and appliances so that they harmonize with the grid. That is, demand-response controls shift electricity usage to off-peak periods in order to balance supply and demand, and eliminate the need for “peaker” power plants. Demand-responsive technologies are incentivized by time-of-use rate schedules, which will be implemented in California across the board in late 2020. They are meant to save utility companies and customers money, while at the same time reducing greenhouse gas emissions.

How can people be more demand responsive without technology?

People can play the role of a demand-response technology by timing their use of household systems and appliances during peak usage hours, which are from 4pm to 9pm. For example, do laundry outside of peak hours, or run the air conditioner at a lower temperature in the morning, then turn it off and allow the house to warm up throughout the afternoon before turning it back on in the evening (or simply open windows if it’s cooler outside). Ventilating the house with cool night air in the summer can dramatically reduce air conditioning energy as well.

How can grid-tied homes have battery backup systems?

Yes, my own home feeds excess electricity back to the grid but, should PG&E go down, I can run off the batteries for a few days. If the outage lasts longer I can power my home and charge my batteries with my generator. What differentiates systems like mine from the majority of grid-tied solar systems is not only a battery bank but other additional components including a special kind of inverter.

Under the new Energy Efficiency Standards going into effect in January 2020 for new homes, there’s a mandate that a grid-tied solar system be installed. While this is an additional expense, it will save utility customers money over the course of their mortgage.

It’s Officially Official: California Has Approved the Mandate for Solar on All New Homes Beginning In 2020