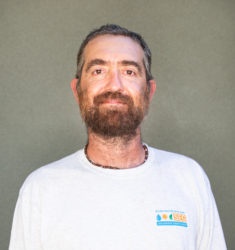 Jason Herm, solar installer at SEG, was born and raised out on the ridge. Jason has been working in the solar industry for two years and living in the Nevada City area for over forty years. Before working in solar, he installed well pumps and off grid solar pump systems. Unique to the SEG team, Jason is OSHA Tin Certified.

Disk golf, road tripping and all things outdoors are just a few of Jason’s hobbies. Disk golf became his passion after he sustained multiple injuries from other sports in and after high school. For a long time, Jason has been traveling around the country, attending disk golf tournaments as a professional player sponsored by West Side Disks.

In the outdoors, Jason enjoys hiking, backpacking, camping and experiencing different atmospheres; one of his favorite local destinations is Bowman Lake, which he has toured around on his motorcycle many times. Lastly, Jason lives in the moment, loves life and believes that the world can benefit from being more sustainable. To the rest of the SEG installation crew he’s known as “animal” because of his presence and spunky personality.