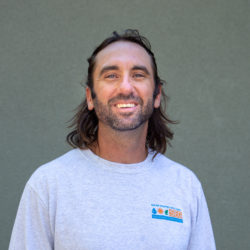 Caleb Walker grew up in Arkansas and attended the University of Arkansas for Poultry Studies, which he applied through working for big agricultural corporations. However, Caleb never graduated college when he was younger and is working today to complete his degree in business from American River College. Back in the day, he worked a corporate job doing studies for large agricultural corporations like Tyson Foods, Inc. and today calls himself a “corporate runaway”, because after 10 years of having his nose against the grind stone, he left work to become a river guide.

Following his career as a river guide, and some time off on sabbatical during which he traveled around Central and South America as well as Asia, he began working for the US Forest Service doing wild fire suppression.

Caleb has worked in the solar industry as a member of SEG since he moved to Colfax, CA three years ago. He received his NABCEP Associate Credential in Photovoltaic Installation from the Solar Living Institute. He is also OSHA 10 certified and competent in fall protection.

Caleb engages with sustainability efforts in the community primarily through the American White Water Association, which he donates to regularly and volunteers with for river clean ups. Also with regard to sustainability, he and his wife, who is also a river guide, have a solar system at their home and an electric vehicle. Caleb believes that solar is cleaner than other energy sources and the way of the future.